Certain parts of the country got the snow rougher than others... Here in my part of deepest darkest Essex it was bad at times, but never particularly deep... I just got thoroughly bored of it being here for so long! Normally the white stuff has the good manners to turn up for a few days, ruin a few commuters journeys, trip up one or two old grannies, let the kids have some fun... and then pisses off sharpish again. But bar a little break around Christmas, I've not seen the pavements (or many of the roads come to think of it.... did Southend Council actually get ANY grit??! Grrr!) for a good month or so.

At the weekend Piley Junior had the time of his life running around the snow in the local park and golf course... With it hanging around so long it got me wondering if this is in fact the worst bout of snow in my lifetime, and assumed it probably must be....

Here's mini Piley getting to grips with the latest dollop of snow: 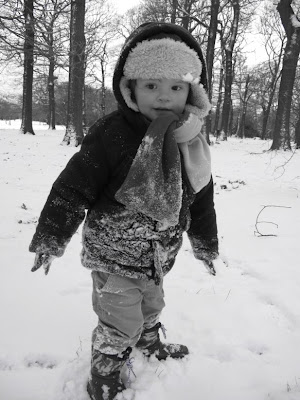 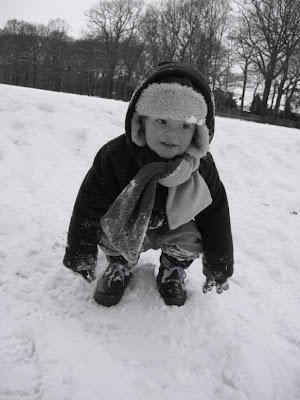 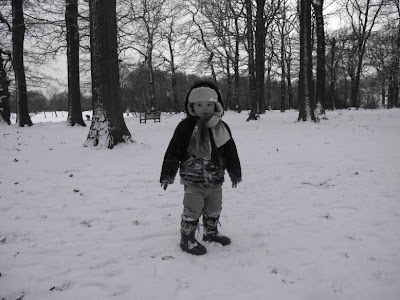 On Sunday evening I popped up in the loft to put all the Christmas decs back up, and whilst there couldn't resist a flick through some old photo albums - I've always been a bugger for taking photos, and what with inheriting my mums collection a few years back too, there unfortunately isn't any room downstairs to house them. The first album I pick up had pictures of the snow of 1987 and it all immediately came back to me!!

In my 43 years spent in the 'softy South', I'm pretty sure this was indeed our biggest snowfall... it all arrived in one lump over a very short space of time, and being old skool snow, did have the good grace to go again a few days later. Here are a few of the photos I found in the loft... worth a look if only to have a giggle at a Piley more than half a lifetime ago! (Eek! Where has it all gone??! I'm 20 in these photos, and I remember it as though it were about 7 or 8 years ago).
the trusty Leyland Mini that mum and I used to share: 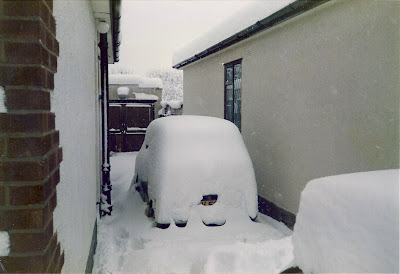 I was a 10 hole Doc Martins kinda guy in them days, and the snow certainly looks to be higher than those! (apologies for those gloves... what was i thinking?!): 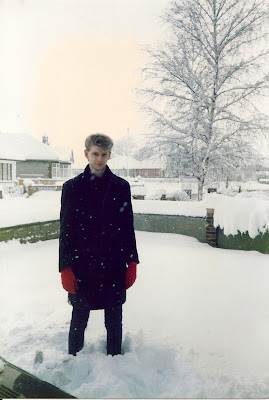 Am assuming that I'm crouching here, and the snow is not up to my waist! Up to the numberplate on that car behind me though: 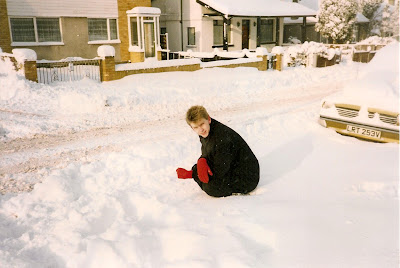 For sheer awkwardness, skating rink pavements and general annoyance, 2010 wins hands down, but if it's a winter wonderland and sheer good old fashioned volume you're after, look no further than 1987!
Piley

You're right, those gloves aren't good. And why have a dump in that cold?

Now 62-63. That really was a cold one. Just about remember that.

I bet that Dave Gahan haircut helped keep you warm, though!

Great pics all round.

Throughout this latest "cold snap" the kids have got fed up with the various utterances of Mrs F and I that have started with "It's not like '87...." I'm in North Kent on the slope of the downs, like you say '87 it wasn't there at lunchtime but the next morning we were pretty much cut off... in the Medway Towns! They rationed bread and milk in the shops on the second day.

However this year has lasted longer than I remember, we are similar to you and still I was shoveling the stuff yesterday off the road and pavements. Hopefully with the temp rising slowly we will see the back of it soon and get to see some grass!

However my Mum always went on about 62 - 63. I was around then but only weeks old so don't remember obviously. But it snowed Boxing Day and didn't clear until March!

Ha, love all the photographs as well as the post-Red Wedge haircut!
I don't remember snow in 87, did it snow in the early months of that year? I do remember the October hurricane though.

I remember 87 really well. I was snowed in for a week and lived on Heinz mulligatawny soup for most of it. It was also the week I finally clicked with KISS, bored of all my old albums, I gave Double Platinum another try and became hooked after a few spins..

79 was pretty heavy too, skidding around the Hadleigh Castle ruins we were literally flipped into a somersaults every time you hit a deep pocket of snow. Me and a mate (the one I mentioned in the last post ) were carving blocks of the stuff to make an igloo..

You tempted with reviving your 87 bouffant at all P?

I'm with the others on the Depeche Mode hair - fantastic!

Oh I remeMber that hair well as I met you Spring 88 if I remember correctly. Love the photos of your little one, bet he had a great time.

Erm those gloves mate, you probably should have doctored the photos before publishing, did you have a matching hat ?

thanks all for the comments...

Warble - Can't give you decent answers for either, other than the folly of youth! I understand 62-63 was 'taters'!

ISBW - Indeedy! It's a shame that out of context old photos do have a tendancy to make you look a bit of a arse isn't it??!!

Thanks Further - glad you remember it like i do! I remember the rationing of bread and milk too! This year has been much more annoying tho.

Ist - Bloody hell mate, where were you holed up, the West Indies or something??! Think the South East got it worst that year, but thought it spread a little further. Funny enough the next pics in the album i found were of the hurricane!

Mondo - it had a special feel that year, I remember it being the last time I sort of liked snow (hate it now!). Will certainly think about reviving the 'ol barnet yes, think it'll look the biz...

Cocktails - sadly, this WASN'T m worst haircut!!! Lets hope I don't venture up in the loft again any time soon!

EF - yes spot on, end of March 88 I met you! Back in 87 I only worse the official regulation colours of goth.. black and red!! but why didn't i go for black gloves?? Piley Jr really loved the second dollop of snow... wasn't fussed before Christmas, but after he loved it. He ran and ran for ages in it!

Funny, I have no memories of snow in '87 at all - eclipsed by the tree that blew onto our house during the hurricane that wasn't coming. Maybe it wasn't as bad in Hertfordshire.

I'm sure the gloves were a statement.

We haven't had a snow worth a damn here in quite some time.

I was in Spain for most of 87. I came back in October in time for the hurricane and I slept through it.

hi Simon, thanks for dropping by! I'm like you, and had (until I found this photo album) forgotten the 87 snow. The hurricane is always well remembered tho isn't it? Helped by the continual repeating of that BBC weather forcast whenever that can squeeze it in!

BLOODY HELL!!! the Heff-Meister!! I thought you were dead Sir! Only knocked you off my blog roll a week or two ago, coz I couldn't access your site anymore - kept saying it was 'members only' or something?? Good to hear from you chap. Will pop over in a sec and see if I can get on to your site.

Ist - haha! funny enough I slept through the whole thing too!!

Heff - nah, still can't get in. Can't you make me a member or something??

I was working at Falmer Jaens in Rayleigh in 87 , i stepped out that first snowy morning and it was past my knees. A quick walk to Hadleigh high street confirmed i was not going to make it to Rayleigh that day, nothing was moving at all(fuck walking in that lot as i saw others doing). I spent the next few days kipping at my (now ex) girl friends house after work (she lived in Rayleigh) to save me trecking through it all.
Carl.

Carl - Bloody hell!! Falmers Jeans!!! whatever happened to them?? (and their factory)

It certainly was some lump of the stuff wasn't it? I remember how hard it was to trudge up to hadleigh in it.

There was another photo in the album that I didn't include but it did make me laugh... again taken on 'red gloves' day. It was obviously an awful day, and people were struggling to get out, get food etc etc. I note from the picture that in my trudge up to Hadleigh for supplies, I had still managed to come home having bought a record!!! Some things never change!