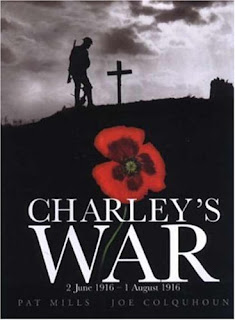 Armistice day seems like a very appropriate day to write about a series of books I've been completely immersed in these last few weeks...

Charley's War was the most successful story ever to appear in British comic 'Battle'. It debuted in the 200th issue (6th Jan 1979) and ran until 1986. Battle was one of those 'serious' comics that I used to flirt with as a child. If I'm honest, at that time I used to prefer the lightheartedness of titles such as Whizzer and Chips, Buster, Krazy, Monster Fun, Whoopee, Cheeky etc etc. My dad used to bring me home the odd copy of Battle from time to time, but as many of the stories used to continue week-on-week, it wasn't really the sort of title you could really dip in and out off. So although I was aware of Charley's War, I never really got into it at the time. To be honest, I wasn't that crazy about war comics anyway, particularly those small 'Commando' comics... they all seemed so one dimensional with fearless Brits up against Johnny Foreigner, and at least 5 "Gott in Himmell" speech bubbles per issue! But here's the twist, hidden away in the pages of Battle, Charley's War was the ultimate 'anti-war' story, full of scared shitless 'Tommies', men and boys caught up in the terror of World War I.

Written by Pat Mills (creator and editor of 2000AD) and incredibly drawn by Joe Colquhoun, Charley's War is nothing short of a masterpiece, in fact it has been described as "the greatest 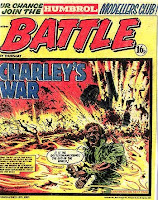 British comic strip ever created". The attention to detail is stunning, and Mills went to great lengths to ensure the factual accuracy of the script, and although the tales that unfold did not happen to any one person, they DID all happen. Yes, 100% of what you read in this harrowing 'kids' comic strip actually took place, and that is perhaps the most powerful thing about it. Unlike the gung-ho attitude of Commando and other war comics, Charley's War deals with many of the cold realities of WWI such as fear, death, mutiny, execution, pacifism, class struggle and the appalling treatment of fellow human beings.

In 1916, sixteen year old Charley Bourne lies about his age and signs up for King and country. Within days he finds himself in the French trenches, just weeks before the Battle of the Somme. Charley becomes a rather unusual comic 'hero', no macho bullshit here, just a frightened boy, with no idea what he had signed himself up for. Mills never pulls his punches, as Charley goes through just about every battle of WWI.

These books should be mandatory reading for every schoolchild, as a factual, social document on the horrors of war, and it's in a format that is likely to appeal too. The irony of it is of course, the graphic, and horrific nature of this story would not even be allowed to be published in a comic for our delicate little kids these days.

If you get the chance, I can't recommend them enough.

Charley's War is currently being re-printed in full, in beautiful hardback books by Titan. Volume 5 was released last month. You can buy them all at Amazon here 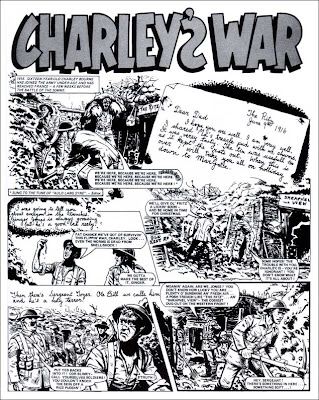 Cracking blog Piley and as we discussed I cannot believe in the 20 years of knowing you I have never told you how fond of Charley's War I am. I have all the stories from when they were first published in book form and am severely tempted to collect this smarter looking set. I know you are dubious on film adaptations but if ever a story would suit the big screen this would be it, especially as there is little dealing with this conflict (All quiet on the Western Front one notable exception).

I can't add anything else to what you have said other than I recommend anyone reading to try these out.

Good post. Collecting these myself and couldn't agree more.

I've not heard of this before but it certainly sounds likle something I'd check out. I'm reading Jan Savage's superb 'Teenage' at the momengt and the chapters on the First World War are frightening reading. There are accounts of sixteen year olds being shot for cowardice and desertion which is unreal. Children thrown into a war that must have been unlike anything that they could have imagined and when they got frightened they were shot by there own side!! Dreadful stuff.

Piley, it's great to see another blog about comics. Hopefully this Charley's War reprint series will bring the strip to a much wider audience.
I couldn't agree more with you about Charley's War being used as a teaching aid for school children. This work really brings home the grim reality of warfare. This is one of the great British comic strips - I really hope that Titan Books continues the series until its completion. Fab stuff!

Far and away the best comic ever made. It even got in at the very front of one book shop in Lincoln alongside the more predicatable ones about remembrance day.

Thanks for the comments all...

EFR, Lubbert, Michael - Titan have really done this story proud with these latest re-issues. Buckets of extras in there too.

Marmite - Do yourself a favour and have a try, you really wont regret it. Pileys legendary Graphic Novel lending library is ALWAYS open!

Dave - my one fear is that the sales will drop off, and Titan will 'can' the series. Vol 5 shows no sign of dropping off though. Worried about the end of the run though, I understand there was a disagreement, and Mills left before completing the story. Someone else wrote it for the last year or so, and by all accounts was not good.