Your Time Is Gonna Come.. 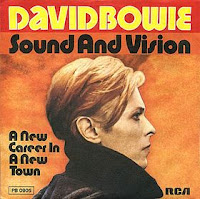 It's weird how your perception of time changes as you get older. In January 1977 I discovered David Bowie, when I heard his latest single 'Sound and Vision'. I was blown away with the song and was desperate to find out more. But the more I found out about the man, the more I felt as though I'd discovered some old codger on his last legs!! From what I was reading, it seemed like all his glory days were way behind him (Ziggy, Aladdin Sane, Diamond Dogs, Young Americans etc), and at the age of 10, five years ago (when he was Ziggy) seemed like a million to me... why it was half a lifetime! Yet looking at it now with my '40 somethin' head on, I wasn't far out at all, and I was slap bang in time for what is arguably his best work (the Eno trilogy). The modern day equivalent of this (2003) seems like only a few months back... and to prove it, all these things were happening just 5 short years ago:

- The invasion of Iraq began;

- 3rd and final film in Peter Jackson's The Lord of the Rings movie trilogy released;

- Madonna and Britney snogged at the MTV awards;

- Phil Spector was arrested for investigation of homicide;

- Blur released their most recent album to date, 'Think Tank';

- Iggy Pop released 'Skull Ring', including his first new recordings with the Stooges;

Here are some more freaky facts from the perspective of the 10 year old me in January 1977, all 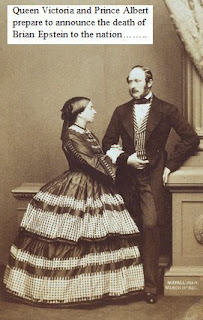 - Some old dudes called the Beatles split up 7 years ago (they were SO old, that their 1st single came out 15 years ago!!);

- Top of the Pops TV show has been going for 13 years;

- World War II finished 32 years ago, and food rationing in England only finished 23 years ago. 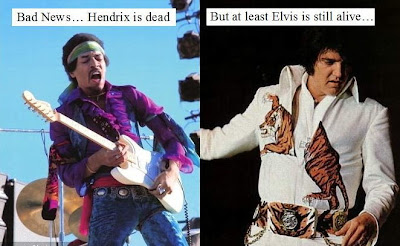 Ain't it weird how all of these things seem quite recent when you read them now??

Well I've made myself feel ancient... how about you??

1 year since I started blogging

6 years since the booty remix explosion.

25 years since my first trip to Crocs

31 years since the Pistols album.

Ironically the gap between 1970 - and 1980 felt much longer. Also makes you realize exactly how much The Beatles crammed in to 7 years worth of recording

Thanks Piley. Now if you'll excuse me, I've got to go have my adult diaper changed and head off to the assisted living facility for my dinner of applesauce.

Mondo - the 10th Aniv re-releases is a good one!! I find myself thinking "ok fk, i wish i'd waited, i only bought that a few months back" but its more like 8 years!

Heff - good man, if you are a good boy i'll melt some jello for your desert...

RE - I don't believe it! rumbled after 31 years! Yes I was the kings cheff back in 77, and I replaced all his low fat burgers and healthy cheese slices with full fat ones. I feel terrible now though... how could i possibly have known what would happen?? I was only ten!!

23 years since my favourite cat died

4 or so years since I started blogging

Half an hour since I have jsut started to bore/frighten myself realising how long ago everything was!

Cheers, I was feeling quite chipper until I read this. :-)

This really struck a chord with me this peice. When i was a kid i remember my Dad saying "when you get older time just fly's by" . I thought pah ! what does he know ?. Quite a lot apparently he's f**king right. Christmas's come round like weekends , my kids are 11 and 7 (it only seems like a couple of months since i brought em from home hospital in a blanket), Arsenal have won nothing for 3 years 3 YEARS !!!!! , i still think of the White Stripes as a NEW band , it's 27 years since i attended my first gig and i've been with my woman for 20 years. When i was getting into Hendrix around the same time Mr Pile was getting into Bowie it seemed like Jimi had passed away centuries before but it was just 7 years , I watched the Woodstock movie thinking wow and it had only been 8 years ago but the Clash and Pistols made it seem longer if that makes sense. Things change so quick and stuff seem's old. Time eh ? weird stuff to be sure. Enjoyed every ones comments too , Cheers. Carl.

This post has given me a bit of a headache Piley.
I think of '77 as the year the world turned slowly from the dullest black & white to colour.
I guess it's because oddballs like you and me fixate on music so much we relate the timescales of what's going on in the real world to what's happening in popular music culture.
For example I can hardly remember anything that happened in the 80s. I'd like to think that it was because the music of that decade was so rank. Maybe it was just the chemicals though?

By the way. New podcast up. Pre 75 reggae. It's my best yet apparently.

Madonna and Britney snogged !? Ermm just popping over to You Tube.........

RM - some very poignant memories there, bet they all seem like yesterday too.

Thanks for the comments Carl, glad it got you thinking! Athough the most depressing on your list by far was the Arsenal one... ;-)

Marmite\Ad - Sorry lads, i seem to be giving a few people headaches with this one. Maybe we are gettin (a-hem) old??! nah!

Ad, well to ground us both, Carl n I both support Southend Utd too!! So feel your pain Sir....

I go and watch Southend occaisionally but i have the luxuary of slight detachment when i do , in a way it feels like i'm cheating on my beloved Arsenal:-). I like to see em do well but the only pain i really feel is for Arsenal. Cant afford to go any more and the place is packed with passionless rich twats too :-( . Carl a Gooner till i die etc etc !.

a god no - here i am crumbling as i type and if was possible to feel more ancient then i do. it was all that five years ago stuff. i can't decide whether it was all long ago or just yesterday. i'm going for a nap
x