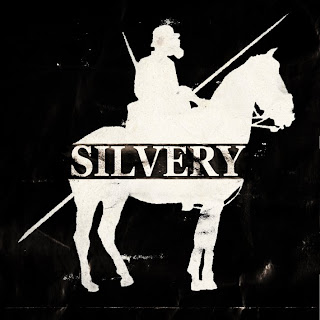 I stumbled across em last year, and was even lucky enough to interview lead singer James for the blog back in November. Since then, the Silvery buzz has continued to grow, with plenty of radio coverage (including a blistering live session for Steve Lamacq and a Marc Riley session to come shortly), magazine articles and sold out shows.... which all leads to the perfectly timed debut album Thunderer and Excelsior, which is out tomorrow (11th Aug).

I received a promo of the album a few weeks back, and have listened to little else ever since. This fully realised album captures the band perfectly, and is sure to catapult them into the heart of the indie scene. For me, Silvery are a dream come true, tapping in to so many influences that appeal... Take Blur at their coolest, the Kaisers at their strongest, XTC at their most majestic, Bowie at his Ziggy-ist, add the keyboards and quirkiness of Sparks, throw in a Wurlitzer fairground organ sound for good measure and mix it up with 14 insanely addictive songs... and you are on the way to discovering one of the most exiting debut albums of the year.

The album bursts into life with Horrors - 1minute 45 seconds of perfectly manic punky pop. It's 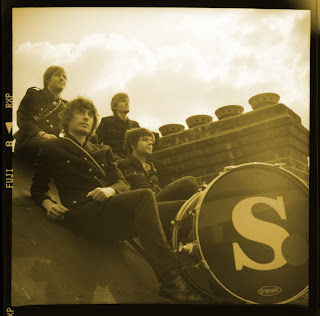 the ideal scene setter for what's to come, and before you know it, new single (also released tomorrow) Devil in the Detail is unleashed on you. It's a relentlessly frenzied attack on the eardrums (check out that 70's Bowie guitar riff mixed with an organ sound straight out of a Hammer Horror!), and if there is any justice this single will do well for them. Silvery have never made any secret of their love for Ron and Russell Mael, and Action Force is testament to that... as it just about 'out-Sparks' Sparks! A Penny Dreadful reminds me of Blur, circa Modern Life is Rubbish... Only 4 tracks in, and you've already heard 4 potential hit singles. There really are no fillers on this album, this is eccentric Britpop at it's very best... every track is bursting with energy, and almost every one of 'em is 3 minutes or less.

Animals Are Vanishing is the perfect final track. This swirling, dreamy, almost emotional song wouldn't fit right anywhere else on the album (much like 'This is a Low' was the ultimate way to complete Parklife). It's the ideal way to bid the listener farewell... but it's unlikely that one play will suffice, my copy has been stuck on repeat for the last 3 weeks!!

It's great to see a band making a proper indie noise again.... The current indie scene has been abysmal for some time (more like easy listening pap that your parents would like), so the stage is set for Silvery to make it credible once more with their exciting and intelligent brand of madness!

Buy it, listen to it, cherish it!

And if you're in or around London, you can even see the band FOR FREE this week! To celebrate the 1st birthday of Rough Trade East, Silvery will be performing a full 'in-store' show this Friday (15th Aug) at 7.30pm. Shop details:

Buy Thunderer and Excelsior at Amazon

Link to Silvery on MySpace

Further details on Rough Trade East (including a map)

The video to Horrors:


The brand new Devil in the Detail video:


An old Devil in the Detail video: