Dracula and the Sweet Transvestite! 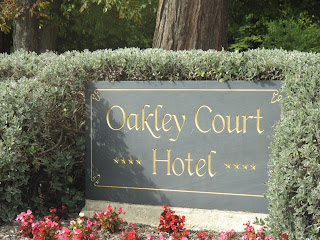 There's obviously something wrong with me y'know... During our 'days out' over the last two and a bit weeks, we took in a visit to Windsor. It's undoubtedly a very picturesque place, but a bit heavy on the tourist trappings for my liking (is there ANY shop in Windsor whose name doesn't start with "Ye Olde..." and end with ".. Shoppe"??!). It's a nice place to visit, but if I'm honest it left me a little uninspired. Even the castle only got a casual glance from me as we walked past (and I'm buggered if I'm paying £15.50 a head to have a look inside). But the building I WAS brimming with excitement about was a hotel in Water Oakley, Bray - a short 10 minute drive out of town. A fascinating building which became an unlikely film star back in the 50's 60's and 70's. 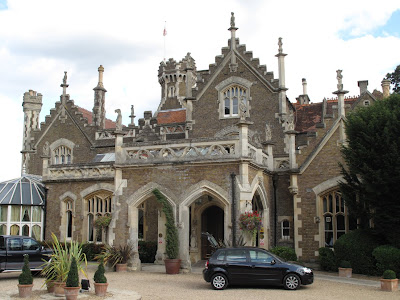 Oakley Court is a very posh (and very nice) hotel these days, but it wasn't always the case.... This wonderful neo-Gothic mansion was built in 1859 for Sir Richard Hall Say, in the style of a French Chateau (the story goes that it was to comfort his homesick French wife). It changed hands a number of times during the late 1800's and early 1900's, until in 1919, Ernest Olivier bought it for £27,000. It remained with Olivier for almost half a century. But an interesting twist still awaited Oakley Court as it approached its 100th birthday... 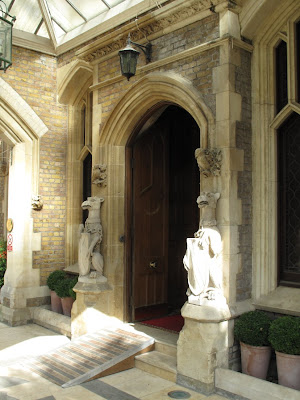 In 1951 Hammer Film Productions were looking for a new location to base their organisation. They eventually purchased the derelict Down Place, in Water Oakley, Bray (next door to Oakley Court). This was a dream location for Hammer, and the exquisite architecture of the building enabled them to avoid building many costly film sets. By 1952, Hammer had started work on enlarging Down Place, and turned it into Bray Studios, which is still there today (although Hammer sold it in 1970). However, once Hammer were located in Bray, they couldn't help but notice the beauty of their next door neighbour, the Victorian Oakley Court, and Olivier even allowed them to use it for some of their films on occasions. 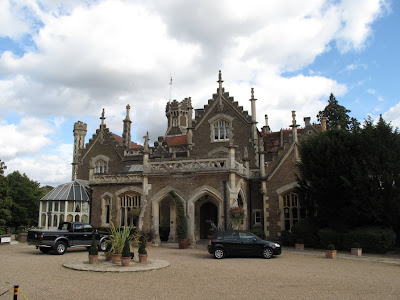 In 1965, Earnest Olivier died, leaving Oakley Court uninhabited. Hammer had already used just about every possible angle of Down Place in their films over the last 14 years, so from 1965 they took the opportunity to start using the now empty mansion. Incredibly, Oakley Court was the setting for over 200 films (particularly Hammers lucrative 'horror' series).... here's just a few titles that feature the building.... 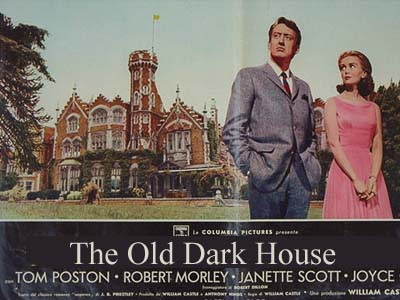 It was also the setting for the 9 Hammer Dracula films: 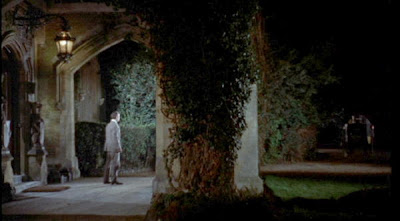 (screenshot from The Brides of Dracula)

When these Dracula films were made at Oakley Court, the directors used to obtain an extra creepy effect by using only candles to light the entire building. 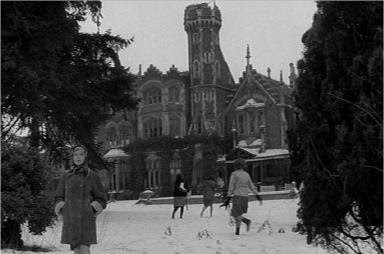 (screenshot from The House in Nightmare Park)

Despite being a very successful film star, nobody was looking after the upkeep of the building and by the time the time the Rocky Horror Picture Show was being filmed, Oakley Court was derelict. Cast and crew were constantly working around strategically placed buckets catching the rain that was pouring through many holes in the roof (apparently just about everyone involved in the film caught a cold whilst there!). The floors too were rotten and dangerous.

In 1979 renovation work commenced at Oakley Court, and in November 1981, it opened its doors as the hotel it is today... back to its former splendour!

I'm quite a fan of the Hammer Horror films... in the late 70's (maybe it was the early 80's) BBC2 used to show a double feature of them every Saturday night.... and it always insured I went to bed feeling very uneasy! However it's the Rocky Horror Picture Show that really does it for me on this one. I used to be crazy about that film in the mid to late 80's. No idea how many times I watched the thing, but it could well be into three figures! For a few years a local cinema used to run it every few weeks as a late night special on a Friday night, and I'd always try to make it. Then when I finally got hold of my own copy on VHS video it was never out of the machine! So discovering that Oakley Court was none other than the lair of Frank-N-Furter was something of a revelation! 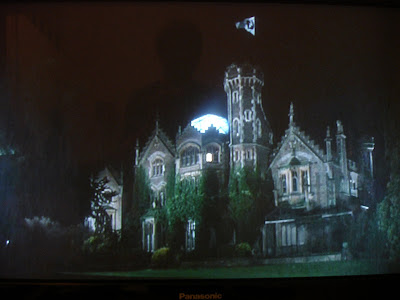 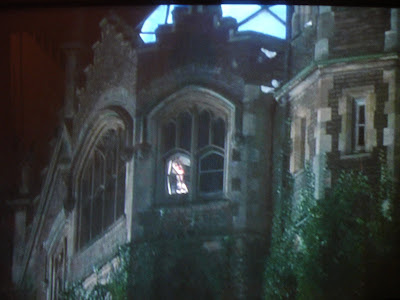 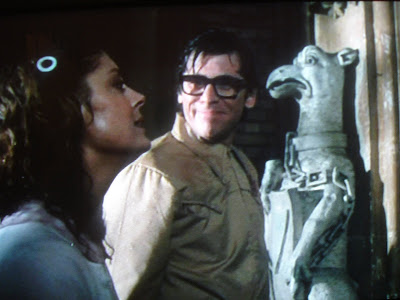 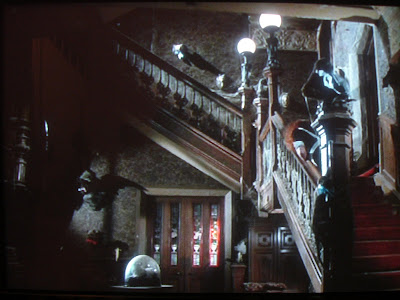 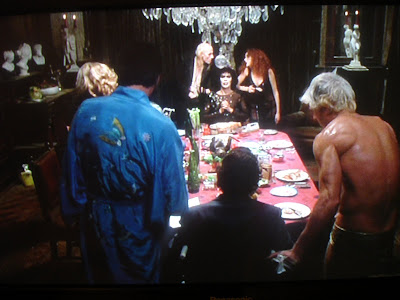 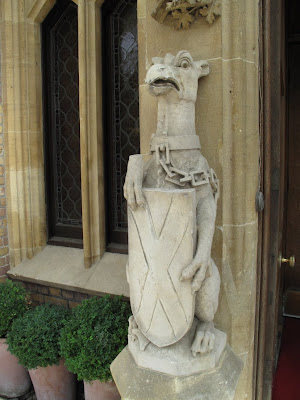 All of the exterior shots in the film (including the scene at the front door) are Oakley Court (although there is an odd mish-mash of front and back shots, all pretending to be the front!), but some of the interior ones are too... All the scenes that take place in the hallway are Oakley Court (and the exact same stairs and banister remain to this day). And the scene where they all sit down to dinner (which turns out to be the remains of Eddie!) was filmed in a room off of the hallway. Oh and it could be a coincidence (I like to think of it as a nice touch) but there is now a grandfather clock in the hallway in exactly the same position as the one in the film!

It's well worth a visit, the staff are very friendly, and don't have a problem with you taking a few photos.... so set your Sat Navs to the following if you are ever that way (£15.50 cheaper than Windsor Castle too!):

Another winner P. The Rocky Horror *sighs* happy days at the Classic cinema.

You'll also spot Oakley Court in some of the Hammer House of Horror late 70s early 80s TV epsiodes..which you can grab for under a tenner I think.

What an excellent post Piley old chap. I love Hammer movies so this was something of a revelation for me. And just down the road too. My dad used to joke that most Hammer films were shot on location in Black Park. Ay truth to this?

Last month we did a 4 hour drive to Boston and Rocky Horror was on the dvd player for the kids. They loved it.

About 20 years ago, when the missus and I went to Londo, the one "culture" thing we did was to go see the Rocky Horror play, starring Tenpole Tudor.

Spent the evening after my wedding here, before jetting off to New York on honeymoon, but in 1995. Bit of a waste, didn't get much time to explore the place, it was early evening when we arrived.

Fantastic! What a find. Combines a couple of my long-lost loves, Hammer films and the Rocky Horror Show (I made a quite convincing Columbia at a few parties back in the day...and the boys never needed much persuading to dress up as Tim Curry.).

And you're virtually guaranteed not to bump into any of Fergie's 'orrible offspring. Great stuff.

What a fantastic building , i'm glad it was not left to rot and fall down like so may are. When i was a kid my Dad used to work on Saturday nights as a chef to earn extra dough and my Mum and i would sit and watch the late night Horror films , including many Hammer films. As you say Piley i too often went to bed feeling very uneasy some times down right freaked out (remember The House That Bled To Death ??? , i can still remember how freaked i was after that all these years later). I think i must be the only person in the world that does not rate the Rocky Horror Picture Show though , i always though t it was cobblers :-).

Wonder how much a room is per night ?.

Mondo - You could be right about the TV series, although it stopped being a 'star' in 1979... so it's close. I remember it being in an episode of the Professionals, and I THINK it was the house in the 'cludo' tv series?? (maybe??)

Axe - Your pop was spot on Col... certainly most of the 'big spooky houese' were one or the other of these two buildings, but many of the outdoor shots from the Hammer Horrors were were Black Park. Not just Hammers either, Bond has been shot there, Doctor Who, Harry Potter, loads of stuff. Your dad knew a thing or two mate.

Nazz - Its one of those films I assume I'm tired of these days, yet when I do dig it out (like Friday evening for example when i took these screenshots), I find I still love it and have to watch it again! The songs are still great!

ISBW - I know, fab isn't it??! hard to imagine that we actually had a real film industry once isn't it?? Hammer used to churn em out almost weekly. Not just horror either, all sorts of stuff. Them were the days.

Carl - Just coz you don't cut in in suzzies and stockings... not need to be bitter ;-)

I remember the house that bled to death... think it was one of the TV series wasn't it?? creepy.

Jesus Piley, another winner! I like learn shit and stuff when I come over here, Tom Poston, LMAO!

Another fascinating piece. CAn you actually get in to look round or will they just let you look round outside? Not too sure i'd fancy staying there though. First hint of a few spooky noises and I think I'd be needing clean bed clothes.

I loved those low-budget Hammer horror flicks as a young troll. My fave was "The Creeping Flesh". Didn't know they made other sorts of movies.