The Costal Town, That They Forgot To Close Down.. 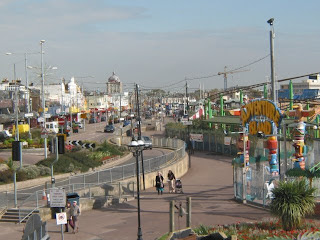 Sang Morrissey 20 years ago on his second solo single 'Everyday is like Sunday'. Potentially it could have been about any antiquated resort by the sea, but as the whole video was shot in Southend, I got the hint. And you know what? I think ol Mozza may have had a point.

This post was going to be a review of 'local lad done good' Jake Shillingford’s live return to Southend after over 20 years… but after attending the show last night and witnessing the shocking turn out (I counted 32), I'm up for a moan on the continual apathy of music fans in South East Essex instead…

Strangely enough, this part of the world has a pretty good record for producing local talent. In the 70’s it was the Southend\Canvey Island Pub Rock scene that discovered the likes of Dr Feelgood, Wilko Johnson, Eddie and the Hot Rods and the Kursaal Flyers. In the 80’s Basildon spawned Depeche Mode, Yazoo and Alison Moyet. Recent successes from Southend have been These New Puritans, The Horrors and Get Cape Wear Cape Fly. However, like Jake, I imagine that in order to find success, they all learned one important lesson -- get out of town!

I can't speak for the 70s, but I've been going to live shows in the area for about 25 years. There has been the odd rammed show from time to time, but on the whole I’d have to say attendance has often been on the quiet side – no matter who the artist. A friend of mine was the promoter for a local club in the late 80s and brought some of the cream (at that time) of the indie scene to the venue. And whilst these same bands were selling out around the rest of the country, my friend lost money on just about every show (incidentally, he too had to leave Southend in order to become a successful promoter!).

20/25 years ago Southend had some great little clubs and live venues, today there is almost nothing -- and that's despite it now being a university town, flooded with students. However it's not difficult to understand why so many of these venues have disappeared over the years, as for almost 3 decades the occupants of the town have not supported live music in great enough numbers. I'm not saying people should be frog-marched into the nearest live show, but if people want live music on their doorstep, then there's only one way to ensure it keeps coming.

Just three months ago Jake (with his band My Life Story) was playing to 1500 people at the Shepherd's Bush Empire, tonight (31st March) he continues his solo tour in Portsmouth and it's already sold out, so how come the return to his roots was so poorly attended? On this occasion it may not entirely be the fault of the locals. The advertising for this show was shocking! I live here, and had it not been for MySpace, I doubt I'd have known it was on either. Not a single poster anywhere in town, and it was even missing from the venues leaflet of upcoming shows.

Armed with a 12 string guitar and Toni Krause on keyboards, Jake gave those who did turn up at night to remember. He performed stripped down versions of songs right through his 20+ year career. All three My Life Story albums were touched upon, as was material from his electronic project Exile Inside. There was also plenty of new material from his debut solo album. A great night out, and a chance to catch up with a few old faces… but I won’t hold my breath for his next return to Southend!

You can watch Jake and Toni performing at an earlier date on this acoustic tour here, with the My Life Story song 'If You Can't Live Without Me Then Why Aren't You Dead Yet?'

Let's hear it for Basildon, great things have come from there!

Margate, anything come of any good from that god-awful place? I can think of Tracy Emin...

Good post mate, very good indeed. And now I am about to mount my hobby horse again (don't groan) but if yer man was a tribute act he would probably have filled the venue. Punters today hav etoo many reasons not to go and see a band. For example, you often have to pay silly prices, you can't smoke, you can't park, people have bloggers arse and are too easily amused at home these days. Blame it on easy acess broadband and wide screen tellys and Sky Plus HD and sports channels etc. In other words, in the old day swe used to go to gigs because we didn't hav e alot of choice. It was either that, the pub or the pictures. And in the
70's you could still go to a dance and have a live band play all of the hits of the day. We loved the scene back then. Now it's like pulling teeth getting people to go out. Another factor to consider is that once upon a time we had close family around us to fob the kids off onto. Nowdays people seem to live in isolation and find it hard to get baby sitters. I could go on, but I'll spare you the tears. What will happen is that live music will fade out in certain pockets such as Southend, but it will return when some bunch of kids form a band and start o excite the local kids and off it will go again. Unfortunatly by then all of the suitible venues will have been turned into Irish themed pubs or some such other crap and nobody will give a rats ass. Am I going on?

I think this is a mixture of the advertising Piley mentions and perhaps there are plenty of people in Southend who aren't particularly fussed with MLS !

...its the apathy of the masses that 'paints a vulgar picture' Ian...after decades of inquisition as to why the plebs are such dullards...I've reached the monsterous conclusion that barring a few pockets of cultured deviants...we are residing in a country of indifference, that embraces americana throwaway principles, makes gods of shambolic pop wannabees in the name of art and judges quality control upon inclusion in listmania!...if in december this year, Jake's solo LP is mentioned amoug the essential CD's to be listened to by the guardian readers of this isle (which no doubt they will if Robbie lifts Jake's song as a single) every 20/30/40 somthing with a combat jacket, star wars T-shirt and converse, pushing baby ariadne in her high-tech push chair will be swinging to the big band sound of MLS on his I-Pod and claiming they were at 'the riga' on 30/03/08!

Apparently Southend audiences are getting a reputation as a tough crowd for turning out and trying to please. I played Riga about a year ago, and the main band (The Nightflies - a Brentwood band) said they've heard horror stories about southend attendances. But it's not just live music , I heard a radio interview with Steve Coogan( I think) where he said he'd never play Southend again because of the audiences apathy, and recently saw the The Mighty Boosh talking about the Cliffs Pavillion show - where after announcing Bolo was a Southender got absolutley no reaction from the crowd. I don't think they'll be back either.

I saw MLS first ever gig, in fact I saw them before they were MLS. And great they were too. However Mr Shillingford forgot his fans who went troall those early gigs and once stated that he didn't think much of Southend and would only come back if he played at The Cliffs Pavillion (the biggest venue in Southend pop pickers).

Maybe, just maybe some people remembered that and decided that as Mr Shillingford didn't support the Southend music scene when it was on its knees and in need of a band to see, we might forget him.

My Life Story stopped playing in Southend originally because people stopped coming, there really weren't any fans to speak of & I should know! The reason that MLS (90's model) never played was circumstantial, as far as I remember.

I think all of us have mixed feelings about out hometown, and that is evident in this little discussion, but there was never any question of MLS boycotting the town.

Some towns are just a little flat as far as gig attendance goes & I salute all the bedroom promoters who have tried to breathe life into Southend over the years!

Some very varid comments, thanks everyone.

I personally don't think it was a problem with Jake, I think it was down to the complete lack of promotion and the ongoing effort to actually get people off their backsides, as Axe nicey described... and as I've witnessed in the last 25 years, Southend has always been pretty poor at it (and that's even before internet, mobile phones, mp3 and sky tv!). Mondos comments seem to back that theory up too.

Great to hear from ex-My Lifer Mal too! Still have my copy of Home Sweet Zoo with your rather dapper picture inside the gatefold cover!

Southend is a poxy soul boy town , the disco's are packed the gigs are empty. I blame high prices at gigs too. Nazareth played club Riga a while back , i thought "i'll have some of that" the tickest were about £20 , i mean f**k off , it a PUB NOT WEMBLEY STADIUM GUYS !!!!!. There are a lot of music fans in Southend and a lot of talent but hey it's a soul boy seaside poo hole and it's getting worse. Carl.

I was at this gig and bought my tickets through an E-mail I recived via the My Life Story web site. I to was expecting a full to capacity crowd for his home coming.
But what a poor turnout. Having said that Jake did not disaappoint and turned in a fantastic performance. I even got to speak to him at the bar before and after the show.